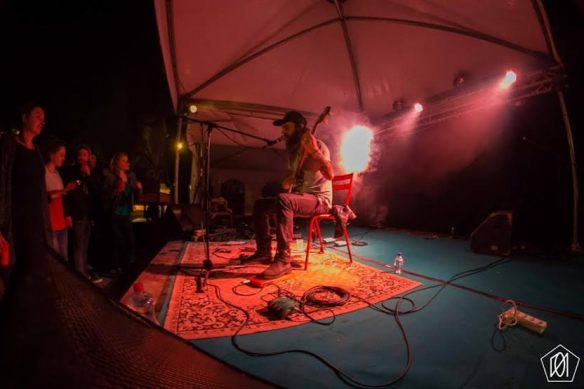 While a One Person Band scene has developed in the United States over the past few years, it has always had a strong presence overseas. That being said, we’re proud to offer this BCS interview with popular One Man Band Gipsy Rufina, who lives in Italy and performs all over the world. Enjoy!

Are you exclusively a One Man Band? If not, what other setups/players do you work with?
Yeah, I’ve been full time solo musician as Gipsy Rufina, with different set ups during the years, from the “Dylan Kit” classic acoustic guitar-bluesharp to banjo-stompbox or homemade cigarbox guitars, pedals guitar effects and other shit. But I’d say mostly acoustic guitar and singing. I also have some other projects playing banjo in a country band and guitar in a hardcore band.

How long have you been performing? Tell a little bit about your foray into the world of performance, particularly as a One Man Band?

I started playing punk-hardcore when I was very young, about 15. I had different bands in the years. Then at some point after a period I lived in Chicago. I came back to Italy and I decided to play solo cause I couldn’t find anybody who wanted to play the same stuff I wanted and travel with the music full time. I took an acoustic guitar, a second-hand Kay and started to write songs in a country, blues and folk mood. That was in 2003. There were not so many artist performing solo around in these years,  especially in Italy,  was not so popular as it is now to be one man band, so playing solo you looked like a weirdo.

Then I moved to Germany and met this band playing gigs in the town of Cologne, “The Cowboys on Dope,” and they wanted me as opening act for their shows. So I started to perform as a one man band. At that time I played guitar and sang and I used to tie some bells at the foot. Now im 42 so its been about 12 years I play solo and I’ve played thousands of shows around Europe and South America and made some records.

If you were in an elevator with a  person who was capable of becoming a lifelong, dedicated fan who would NEVER in a  million years request “Freebird,” what would you say to both give them an idea of your music and pique their interest?
I’ve never been so good in explaining what my music’s about. I guess I would play a couple of my tunes first,
starting with a banjo minor tuned [like a] Appalachian mind trip,  to forget we’re in an elevator,  and get deep into some atmosphere. Then when he’s cooked and,  most important,  if he didn’t try to jump out of the elevator because he thinks Im Psychokiller, I would sing one of my fingerpicked guitar songs,  maybe a road one like “The Green Highway at its Nest” or “Wild Boar”. After this, if he’s still alive it means I piqued the interest so I could say lets go to have a beer.

What are the benefits of playing everything yourself? Limitations? Do you see being a One Man Band as a temporary “do what you gotta do till you get a band”  type of thing or is the kind of performance type that you like best?
Well, all is easier if you play alone, as an example traveling. In my case I’m not even a typical One Man Band playing many instruments at the same time so I don’t have to carry around too much stuff,  which is the bigger limitation for an old fart like me. We need some bigger sound sometimes. I mean, I need to make some noise. When I have this need I normally leave home my acoustic and take my bass and snare stomb’oxes and plug my cigarbox guitar into the amp with a lot of gain. I like to have other bands and play different stuff but I will always have my OMB project. I like to be solo musician cause I am a loner.
List three to five of your favorite albums?
Wow, so difficult to choose:
Uprising – Bob Marley
Our Mother the Mountain- Townes Van Zandt
Sweet Heart of the Rodeo – The Birds
Peoples Republic of Rock n Roll- The Ballbusters
Scott H Biram -Graveyard Shift
Haha,  classics.
How can we find out more about you?
my web site:
www.gipsyrufina.com
or on Facebook as Gipsy Rufina
spotify, itunes.
Then there are so many videos people posted on the net, of myself perfoming somewhere around.
Some are nice, the most are terrible! They belive they did a favour to me, but im really ashamed for those!