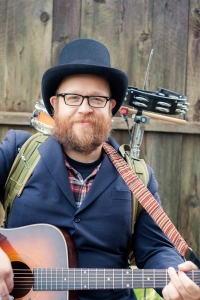 Here at Blue Collar Songwriting, I’ve done my very best to take a wide-angled approach to the musicians we’ve featured. We’ve had women and men of all ages, representing every genre from country to folk to punk to god-knows what. Well, for September I’m gonna get incredibly specific. The focus? One Person Bands!

There are many reasons why I’m particularly passionate about OPB’s. First off, I am one. I perform as Justin “Stovepipe” Stover: One Beard Band. Here’s a pic of me with my get-up:

I’ve had a fascination with these types of performers ever since I saw one perform on Reading Rainbow when I was a kid. But don’t take MY word for it. Here’s the pic of that very OMB with my man LeVar: 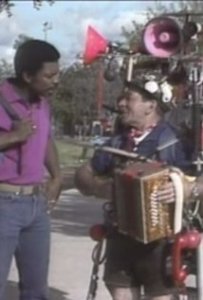 I also (and I realize a lot of OPB’s HATE him) was fascinated by Burt from Mary Poppins. Sure, he sort of makes us all look like clowns. But one wonderful thing about OPB’s is that they have a sense of humor. I mean, let’s face it: wearing a whole bunch of instruments like they are articles of clothing can look kind of goofy. Case in point… 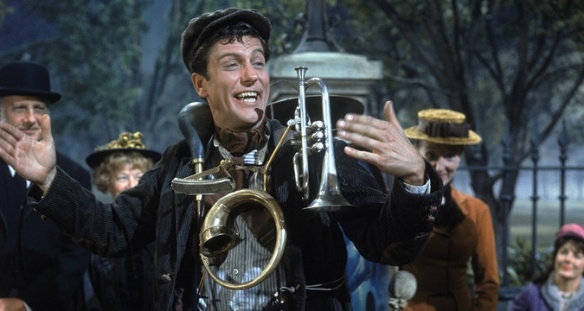 Yeah, there are plenty of OPB’s who have gone a little too far with the silliness and the spectacle of their craft. Regardless, if there is one quality that singer-songwriters of the past 50+ years have NOT had enough of, it’s a sense of humour. So don’t feel bad: it’s STILL a jolly holiday with you, Burt.

So I’ve always wanted to have a one man band apparatus. They don’t grow on trees, though. I’ve looked for years. I finally found one a few years ago thanks to this wonderful company: Farmer Foot Drums.

It’s owned by wife & husband team Pete and Kate, who have since become dear friends of mine and I help out in the shop from time to time. They’ve gradually built a creative, sustainable business for themselves. I truly believe that they’ll eventually be THE most renowned outfitters for One Woman and One Man Bands the world over. They’ll be sharing some thoughts with us on the BCS podcast on a forthcoming September date. In the meantime, here they are. 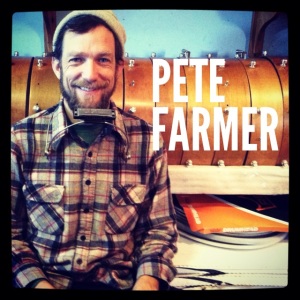 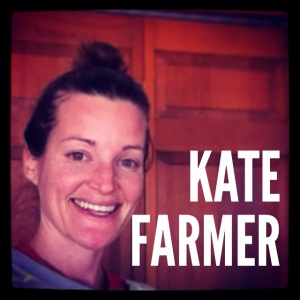 I eventually bought my BackBeat foot drum that you see in my picture above from their company. Now, I would point out that I’ve written songs and performed consistently as a solo act since 2001. But it wasn’t until I put on that BackBeat that I felt 100% right. It felt like a home that I can take with me wherever I go. Since then, I’ve never done a show without it and will soon be adding another foot drum to my repertoire. So needless to say, I’m an outspoken advocate of not only Farmer Foot Drums, but One Person Bands in general.

That being said, enjoy September! I’m officially declaring it One Person Band month and, dammit, I hope it sticks! I’m gonna be geeking out over it, writing articles about it and offering some sage wisdom about this crazy, wonderful type of performance. I’ll also be posting interviews and podcasts featuring some of the best OPB’s currently performing. While I don’t want TOO much competition, I think the time is ripe for One Man and One Woman Bands to carve out a respected niche in our current musical culture; one that will stretch out long into the future. I hope that Blue Collar Songwriting can help ensure this. So stay tuned!